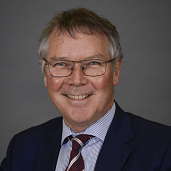 Born in Roxburgh in 1960, David grew up in Dunedin and has a BCom (Acctg) and LLB from the University of Otago.

He was a litigation and managing partner in law firm Anderson Lloyd and was a co-founder of the Dunedin Community Law Centre.

David is an experienced CEO and company director in a range of industries and has experienced both success and failure. He was involved in a number of start-up businesses in the agri-biotechnology field including A2 Milk, and BLIS Technologies which he managed from start-up to the main board of the NZX.

He held various Ministerial portfolios in the Helen Clark Labour-led Government including Attorney-General, Energy, Climate Change, Transport, Land Information and State Services. In 2008 he was named by the Listener magazine as Environmentalist of the Year for his work as Minister of Energy and Climate Change. He pioneered New Zealand’s emissions trading scheme, then described by many as the most significant environmental reform in NZ for decades.

In opposition his roles included Deputy Leader of the New Zealand Labour Party and spokesperson on Finance, Trade and Export Growth.

David was named a minister in the Jacinda Ardern-led government after the 2017 election. He was appointed Attorney-General, Minister for Economic Development, Environment, Trade and Export Growth, and Associate Minister of Finance but Minister Phil Twyford assumed the Economic Development role in a minor reshuffle in July.

After the 2020 election, David was reappointed Attorney-General, Minister for the Environment and Associate Minister of Finance, as well as being appointed as Minister for Oceans and Fisheries, and Minister of Revenue.

He maintains strong interests in the protection of civil liberties, as well as economic and environmental policy.

David pursues policies which both enhance economic growth and address the growing extremes between rich and poor in New Zealand, while protecting the environment.

David is a keen tramper and skier.

There is a broad consensus that the RMA has not delivered on its desired environmental or development outcomes, nor have RMA decisions consistently given effect to the principles of Te Tiriti o Waitangi. Current processes take too long, cost too much and do not enable development where needed. Aotearoa New Zealand needs a resource management system that will manage these challenges more effectively for current and future generations.

In February 2021 the Government announced it would reform the resource management system by repealing the RMA and replacing it with the Natural and Built Environments Act, the Strategic Planning Act and the Climate Adaptation Act. In July 2021 the exposure draft of the NBA was referred to the Environment Committee for a Select Committee Inquiry. On 01 November the Environment Committee reported back on the exposure draft recommending the Government proceed with the NBA. The full Natural and Built Environments Bill and Strategic Planning Bill are expected to be read for the first time in 2022. The Minister for the Environment, Hon David Parker will provide an update on the progress of the resource management reforms.

The Minister will also provide an update on the Resource Management (Enabling Housing Supply and Other Matters) Amendment Bill which is currently undergoing the legislative process (as of November 2021). The Bill amends the RMA to rapidly accelerate the supply of housing where the demand for housing is high. The Bill does this by introducing: