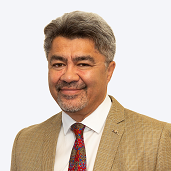 Director, Ngāi Tahu Research Centre at the University of Canterbury.

Te Maire is the director of the Ngāi Tahu Research Centre at the University of Canterbury. He took up this position in 2011, having previously been a Senior Lecturer in History at the University. Te Maire belongs to Ngāi Tahu, the principal tribe of the South Island, and lives in Tuahiwi, the largest village of that tribe. Te Maire is the Ūpoko (Director) of Ngāi Tūāhuriri (the tribal group of the Tuahiwi region in Canterbury). During his years as an undergraduate and later as a postgraduate student at Canterbury, Te Maire helped iwi leaders with their land claim to the Waitangi Tribunal, with a particular emphasis on traditional food-gathering practices. As a specialist historian on oral traditions, tribal genealogies and indigenous knowledge systems, Te Maire was used as an expert witness and historian for the settlement of the Ngāi Tahu Claim - the largest settlement in its day between Māori and the Crown for lands wrongfully taken. Since then he has had a number of publications dealing with oral traditions and the relationship between indigenous knowledge systems and how they intersect with western science. Te Maire’s research interests include the philosophy of knowledge, oral traditions, myth, indigenous development and history.

The Assertion of Tribal Government

Planning for Māori, whether it be with local government or central has tended towards the language of co-management, co-governance or worse bi-cultural frameworks. Over the next decade Māori planning will become more mechanical and directed towards the application of sovereignty by way of tribal government and rangatiratanga which will inevitably be focused on regulatory authority, fiscal authority and ultimately the replacement of Crown Title with iwi radical Title incorporating all aspects of their taonga. How we give meaning to each of these concepts will be where iwi focus their attention as it will require tribal groups to occupy what indigenous groups are calling ‘the Grey Space’.