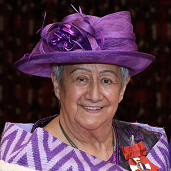 Me aro koe ki te hā o Hineahuone - Pay heed to the dignity of women.
Mō tātou, ā, mō kā uri ā muri ake nei - For us and for those who will come after us.
Ka pū te ruha ka hao te Rangatahi - The old net is done - step back and make way for the new nets.

Dame Aroha Reriti-Crofts is the first Ngāi Tahu Dame Companion of The New Zealand Order of Merit. As the former national president of the Māori Woman’s Welfare League and an active community worker amongst Māori, her contribution to the wellbeing of Māori has been extensive. In her role as the chairperson for the Matapopore Charitable Trust, she believes that the city is starting to look like there is a partnership between Mana Whenua and the Crown. For Dame Aroha, her aspiration is for her mokopuna see themselves, their stories, and their language within the city.

Weaving a new korowai for Ōtautahi

Matapopore Trustees Dame Aroha Reriti-Crofts, Lynne Te Aika and General Manager, Debbie Tikao will present on the process they have undertaken to weave Ngāi Tūāhuriri / Ngāi Tahu identity and values into the urban fabric of Ōtautahi. They will show case some of the projects which have contributed to shaping a more vibrant and meaningful environment - a city that expresses our shared histories and Treaty partnership and which bring to life the stories of mana whenua.